Our Guesthouse has 9 rooms and it’s just the 4 of us running it. Our family of 4 consists of Yvonne (mom) and Michell (daughter) running the Restaurant and the Shop and the men. Ron (dad) and Aldo (son).

We live here and the guests are our guests, we look after them and we try our best. Just sometimes our best is not enough!

Like on Saturday morning I got a phone call from an elderly man who was inquiring about the Guesthouse. After a lengthy conversation during which I was clutching the phone between my shoulder and my ear, whilst cooking breakfast for the other guests, in which I must add I had to repeat myself almost every time I answered a question and tried shaking my moaning 3 year old clinging to my legs… I could tell this Guest will be trouble.

He had his own phone on speaker and I could hear his wife also repeating everything I said to him as he obviously had difficulty hearing. From asking if the rooms were clean? How much discount and if the bed is good? with a lengthy explanation about bad backs and their worry about getting food I assured the man we do our best for our guests. During the day I still had 3 more calls from them keeping me up to date on their progress and arrival time.

As it was a quiet weekend I just had 1 other booking. These guests also called me and asked if they could bring their cooler box…

At the last minute before my expected elderly couple arrived I moved them to another unit as I was sure that the other guest and the cooler box might be causing noise complaints.

The couple arrived at 4:30 pm and the Eskom Loadshedding hit us at 5pm. This meant no electricity until 7:30 at night.

After a lengthy check in process of various repetitions and double to triple explanations I eventually got them to their room. After various snippy remarks without any tact I eventually left them to unpack and ran back to the shop as we were suddenly extremely busy and we were just juggling everything between the two of us. (Mom and I) It was Aldo’s weekend off and that meant that Dad will be handling any maintenance that could come our way. We thought we had all the damage the storm brought two days ago under control. We have solar power and emergency lights in our rooms and even battery powered TV’s so that guests can still relax even while Eskom is loadshedding. An option of free channels and one DSTV channel. Hot water boiler and gas stoves in all our units.

But then our elderly guest showed up… the TV was not working…the lights were not working…and more questions about Loadshedding which he was obviously not used to. In a desperate effort to salvage the situation I pulled my Husband in and asked him to go and see if he can do something about the TV. He came back reporting that it was an overall problem throughout all the units requiring Aldo. Dad went to see if he could help and as he was switching the emergency lamp on to show them that they did have light…it just blew! He went to find a new bulb…returning with the new bulb he got the light working and thought he would open the windows as it was hot…the next moment he stood with the window’s lever in his hand…it broke right off…!! So he thought he would send them back to the shop to go and see the Museum in the Shoe while he repairs the window.

As it was already late we had just closed the main doors and were just about to close up when the elderly couple arrived to see the Shoe. I asked them to come in through the kitchen as the main doors were already closed… Aldo’s girlfriend who was visiting for the night ran to pick up her little miniature doberman pinscher as it was prone to bite strangers. (And the last thing we needed was the dog biting our guests!) She stood holding the dog while the couple passed through the kitchen to enter back into the Shop. After the elderly man sarcastically made remarks about our kitchen and the ‘burnt malva pudding’ which was actually a chocolate cake standing on the counter waiting to cool down…they eventually left for their room again.

After a while my husband returned as he was giving the TV another go he just shook his head and said: ‘I don’t think they like your place’. They complained about the bad hygiene of the girl in the kitchen holding a dog…more complaints about the refrigerator not being cold…and so on.

By now it was almost completely dark outside…we diverted our remaining solar power to the lights around the property and this meant I had to go and prepare their dinner in the dark…I managed to do this with my torch and eventually by the time I got their food and drinks to their room I was exhausted. We went home to have dinner and all laughed at all the bad luck these people were having. Unfortunately it wasn’t over yet…I still had to serve them breakfast in the morning.

The next morning I made sure I was in the Shop extra early as I was trying to avoid any more complaints! As they were eating my mother decided she will at least go and talk to them with her sparkling personality. I heard the elderly man asking her all the personal questions without shame…at one point he said: You are much younger than your husband! He likes them young doesn’t he? (That could have been our only compliment as my mom is only 3 years younger than my dad!)

We bid them farewell with wide smiles.

Some people just have all the bad luck!

The joys of having a guesthouse! 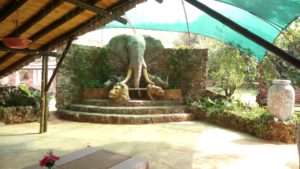